Then, it occurred to me that perhaps this group is actually comprised of adult women, but prefer to refer to them as “girls.” Strange, right? Are they menopausal women in denial of their declining beauty and rising ages? Is it comforting to refer to themselves as girls? OR (the most plausible explanation) does this group prefer to use the term “girls” because they view all women (regardless of age) as young and defenseless? Ok, now we’re getting somewhere! Perhaps that is the root of the problem. How else can one explain a group of women that doesn’t believe in a woman’s right to her own body?

But wait…then something even crazier happened. GAP (lol great acronym for an anti-porn group- thank you Chris Evans for pointing that out) sent out one of the most naïve tweets that I have seen in a LONG while. For their sake, I hope that they actually girls because I can’t accept the fact that grown women would say something so stupid and inaccurate. GAP (hahaha never gets old!) was tweeting some bullshit about protesting Backpage. I tweeted them and asked what their solution would be if Backpage disappears, and sex workers continue to be forced further underground, resulting in even more harm and violence. Their response- “Its called getting a 9-5 job…Like the rest of the world has to; plenty of groups who would help them.”

WOW. There are so many problems with that one tweet- where to begin?!

Perhaps these “girls” should start approaching homeless people and saying “Hey, why don’t you just go get a job!? There are PLENTY of resources for someone such as yourself.” Fucking idiots- that’s the only way to describe this group.

Maybe these “girls” need to take a moment to remove their heads out of their asses and take a look around. There are people who have doctorate degrees who cannot find work. Our economy is shit. Yet, they think it is so easy to go out and find a 9-5 job! Oh, and expect that the job will pay just as much as sex work. Sure, get real “girls.” Someone needs to knock the silver spoons out of your mouths and bring you into the real world.

Also, where are these groups that are willing to help?? I tweeted them asking for the name of even ONE, and got no response. Perhaps I am wrong- do these groups exist? Is there an organization that takes ex-sex workers and gives them the resources possible to land a 9 to 5 job? Resources including money while searching for a job, money for higher education, someone to babysit the children while they’re at work for 8 hours a day, I could go on. Or- how about this- SEX WORK IS REAL WORK AND MANY WOMEN AND MEN ACTUALLY CHOOSE TO DO IT! Some women would rather have sex making $400 an hour, rather than scrubbing toilets for 40 hours to make the same amount (and it wouldn’t even be the same amount. It’d likely be less).

So “girls,” where are these groups? These resources? Perhaps the broke and desperate Pink Cross Foundation? Shelley Lubben is so broke that she’s on Facebook begging for donations. Yeah, good luck with that “help.” Perhaps Shelley should stop stealing and begging and get a 9-5 job as well.

Brilliant work, “girls.” Thank you for proving that white privilege is alive and well, and that some people in this country really don’t understand the economic, political, and social climate that exists. Sex work IS work, and for some, it’s the best option. For some, it may be the only option. For others, it’s an occupation that they truly love and wouldn’t give up for anything. Stop stigmatizing sex workers, and get out on the streets and actually fucking help someone. 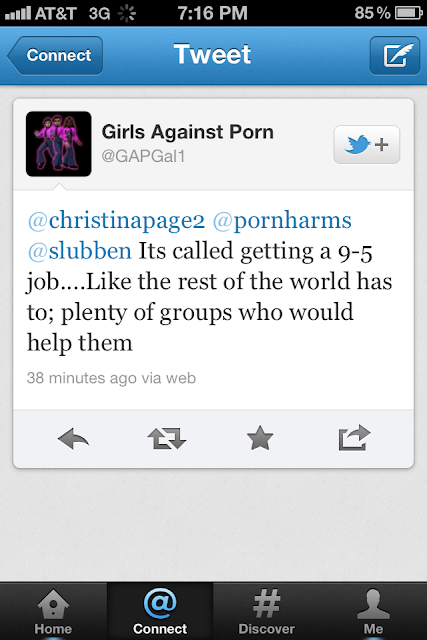 Posted by AdvocateGrrrl at 6:09 PM 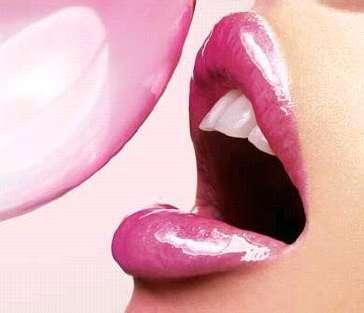